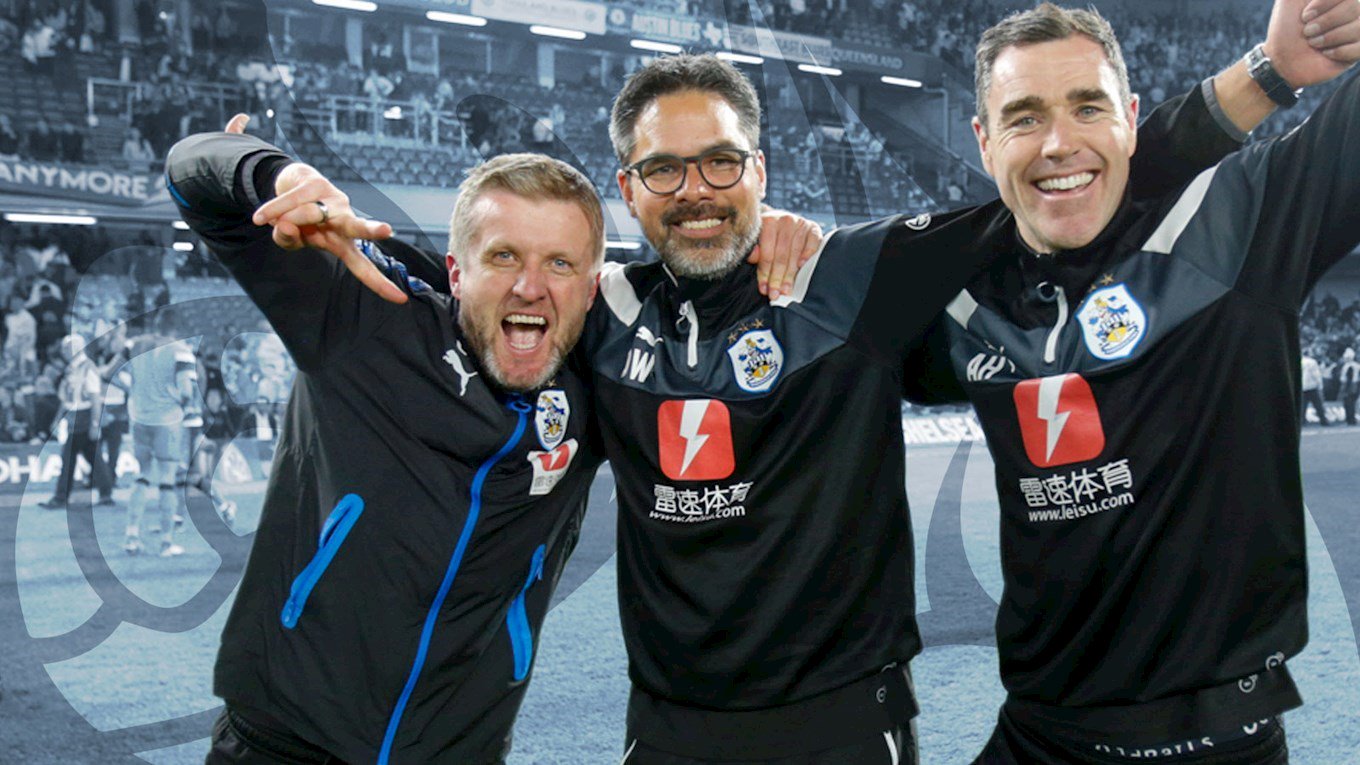 Huddersfield Town has come to an agreement with David Wagner, Christoph Bühler and Andrew Hughes that will keep the trio at the Club for the next three seasons!

Wagner, Bühler and Hughes had one year remaining on their existing contracts, but a deal has now been agreed that will see all three continue to lead the First Team until the summer of 2021.

“I’m very happy that we can announce David, Christoph and Andrew’s new contracts today on the back of a superb debut Premier League season.

“I understand why David is so talked about and sought-after given the things he has achieved here; he’s a very talented Head Coach and has played a huge role in transforming Huddersfield Town into the Club it is today.

“However, I have never had any doubts about David’s future. Time and time again, he has shown his commitment to Huddersfield Town, as the Club has demonstrated its commitment to him.

“It’s also important that the futures of Christoph and Andrew are secure. They’ve played integral parts in the success we’ve all enjoyed. Together, they make a fantastic, talented coaching team as they all bring different skillsets to the table.

“We have a fantastic working relationship and we’re looking forward to taking on the challenge of establishing Huddersfield Town in the Premier League together.”

“The decision to extend my stay at this Club was not a difficult one.

“The relationship Christoph, Andy and I have with Dean, the rest of the Board, the staff and the supporters is special. We’ve achieved some incredible things together in two and a half years and now I’m excited about the future.

“We still have a lot of work to do as we adapt to life in the Premier League, but this Club and its people have the ambition, desire and attitude to take this challenge on.

“Finally, a message to Huddersfield Town fans everywhere. Thank you for the support you have shown us and the players since I joined the Club; it’s been such a big factor in the success we’ve enjoyed.”

Alongside his Assistant Christoph Bühler, David joined the Club from Borussia Dortmund II in November 2015 and made an immediate impact, dramatically changing the playing philosophy and behind-the-scenes culture as the Club consolidated its status in the Sky Bet Championship in the 2015/16 season.

Andrew Hughes joined the Club as First Team Coach on 1 June 2016, adding a wealth of experience of the English leagues to the technical staff after a long and successful playing career as well as coaching experience at Bolton Wanderers, Rotherham United and Crystal Palace.

Those changes, combined with a newly discounted Season Card deal, saw the number of the Club’s Season Card holders climb from around 8,000 to 15,001 in preparation for the 2016/17 season.

Their first full pre-season, combined with a busy summer of recruitment in the European and domestic markets, led to the period now known as the ‘Wagner Revolution’ at Huddersfield Town, with the team leading the way early in the Sky Bet Championship season.

Under Wagner, Town’s Premier League debut was a continuation of the #NoLimits mantra, with the Club making a lightning start to the season with back-to-back victories and a draw. After other landmark highs and backed by unprecedented gates at the John Smith’s Stadium, the Terriers eventually secured a second season in the top flight by securing draws at new Champions Manchester City and previous holders Chelsea ahead of the final day of the campaign.