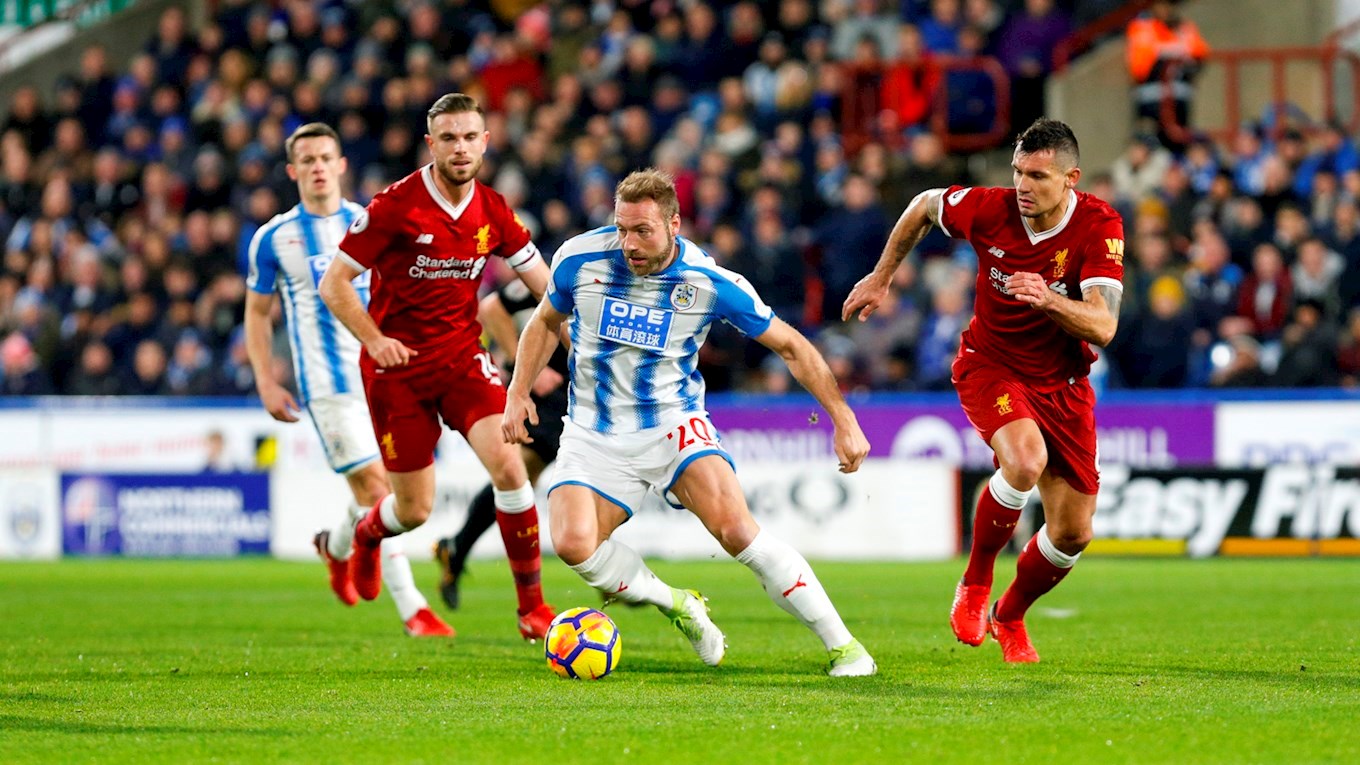 A brisk Tuesday evening in-front of the BT Sport cameras saw Town fall to a 3-0 defeat at the hands of Liverpool.

Jurgen Klopp’s side controlled a large majority of the possession, with Emre Can and Roberto Firmino netting before the interval ahead of Mo Salah’s second-half spot-kick to send the points back to Merseyside.

Town adopted a change of shape to a back three, with Terence Kongolo- on his first Premier League start- accompanying Zanka and Christopher Schindler in the central areas allowing Florent Hadergjonaj and Chris Löwe to operate as wing-backs. Continuing the trend of firsts, Philip Billing slotted into central midfield for the first time since the home draw with Southampton.

These two Clubs last met in the top flight of English football 46 years ago; Town’s most recent success over the Red half of Merseyside occurred in November of 1959, courtesy of a sole Les Massie strike; the outcome that many had hoped for, which unfortunately wasn’t to be as the class of an experienced attack proved dividends in the end.

That potent attack had caused multiple problems to many teams throughout the course of the current season, and two of the front line, Mohamed Salah and Roberto Firmino, looked to link up early on after the latter fired straight at Jonas Lössl from range after Egyptian winger Salah had won a well-contested personal duel against Chris Löwe.

Despite the ever-present pacey threat from the visitors, Town had looked impressively composed in possession themselves with some neat passages of play.

The man to initiate one of the moves down the left was the solid figure of Christopher Schindler, who perfectly timed an intervention on the half-way line to deter Sadio Mané from flicking a pass towards the advancing Salah.

Schindler’s block saw Town progress forward with patience, and coupled with a hunger and tenacity to win the ball back with great deals of strength, Steve Mounié aimed to muscle his way into an opening round the back of Cameroonian International Joel Matip, but on this occasion, couldn’t manage to seek his striker counterpart Laurent Depoitre.

The energy around the John Smith’s Stadium was electric. Florent Hadergjonaj had the sell-out crowd off their seats with an energetic burst of his own down the native right-flank. The Swiss defender beat Andrew Robertson with ease before delivering to the targets of Mounié and Depoitre, with neither able to turn the ball goalwards.

Nonetheless, Depoitre would force Loris Karius into a save not long after the Hadergjonaj dart, with the Belgian using his out-stretched leg to prod powerfully towards the bottom corner to ensure that Liverpool’s ‘keeper was scrambling to keep the scores level. A chance that would inevitably prove crucial, as chances were of a limited supply from here on in.

Joel Matip, who’d wriggled some space within the six-yard box, found a magnificent Zanka block in his path from a near-post corner.

Liverpool kept the pressure on, and with it came the opener. After Roberto Firmino had drawn Jonas Lössl into a diving save from the edge of the area, there was nothing the Dane could do to keep out Emre Can’s half-volley from range, which ultimately flew into the net via a cruel deflection.

The deadlock being broken in that manner was unfortunate on the Terriers, who had started proceedings with great determination and heart in a bid to gain revenge on a side that had beaten them 3-0 in October’s reverse fixture.

Town’s defensive stance was proving to be of a high difficulty to break down, and the duties of sitting in allowing minimal playing space between the lines was somewhat working to an effective degree. Robertson again had some good luck following a ricochet from Florent Hadergjonaj’s tackle, but Town cleared without hesitation to keep the Reds at bay.

At the other end, Chris Löwe came inches from sending the terraces into ecstacy, but a wicked left-footed free-kick sailed just the other side of Karius’ post.

That free-kick seemed to give spirits an extra boost; Steve Mounié had the ball in the net, however the linesman’s flag had been raised for some time due to Aaron Mooy straying offside to receive Florent Hadergjonaj’s lofted pass to conclude a neat move which also involved Jonathan Hogg laying a firm but fair physical marker on Sadio Mané.

On the brink of the interval, the lead was doubled. Firmino sprung the offside trap to bear down on goal, with the end result seeing the Brazilian squeeze the ball in off the post to give Jurgen Klopp’s men a two-goal advantage.

Laurent Depoitre nearly got the second period off to a promising start, but came up short with his pursuit of a long, creative pass straight from Jonas Lössl.

Salah and Firmino worked a one-two deep in the Terriers’ territory. This time around, the sharpness failed to catch out Terence Kongolo, who was on hand to mop up from Salah’s loose touch.

Sadio Mané looked to get in on the act, and his header downwards meant that Jonas Lössl had to be quick to get down and pounce on a ball destined for the corner.

Town were, to an extent, struggling to get out of their own patch. James Milner kept Lössl busy from distance with a thunderous right-footed strike, which was inadvertently cushioned over the bar.

The Blue and Whites’ work rate couldn’t be questioned, but Liverpool were dominating possession and looked comfortable beyond the hour mark.

Sadio Mané again saw a headed chance go to waste, this time after producing a flying header behind Schindler and Zanka in response to Emre Can’s accurate cross from deep.

After soaking up what seemed like endless pressure, the crowd’s persistent backing seemed to urge the Terriers forward. Aaron Mooy’s excellent touch and turn to play in substitute Collin Quaner saw the German go down under the challenge of Robertson, to which the referee deemed not a penalty.

It would be the away side who wrapped up the points from the spot thanks to Mohamed Salah tucking away a penalty after Philip Billing was adjudged to have unfairly brought down Emre Can.
Salah’s penalty had more or less dashed the Terriers’ slim hopes of gaining any sort of reward, but the Town performance had been one of a dogged nature. The defensive unit of Schindler, Kongolo and Zanka marshalled the dangerous front relatively well, and the overall determination to keep battling was evidently there for all of the 24,121 crowd to see.

Birthday boy Tom Ince worked a decent opening for a consolation as injury time approached but the deflected effort failed to cause Karius in the Liverpool goal, as attentions now turn to Saturday’s fixture against Manchester United at Old Trafford (February 3, 3pm).