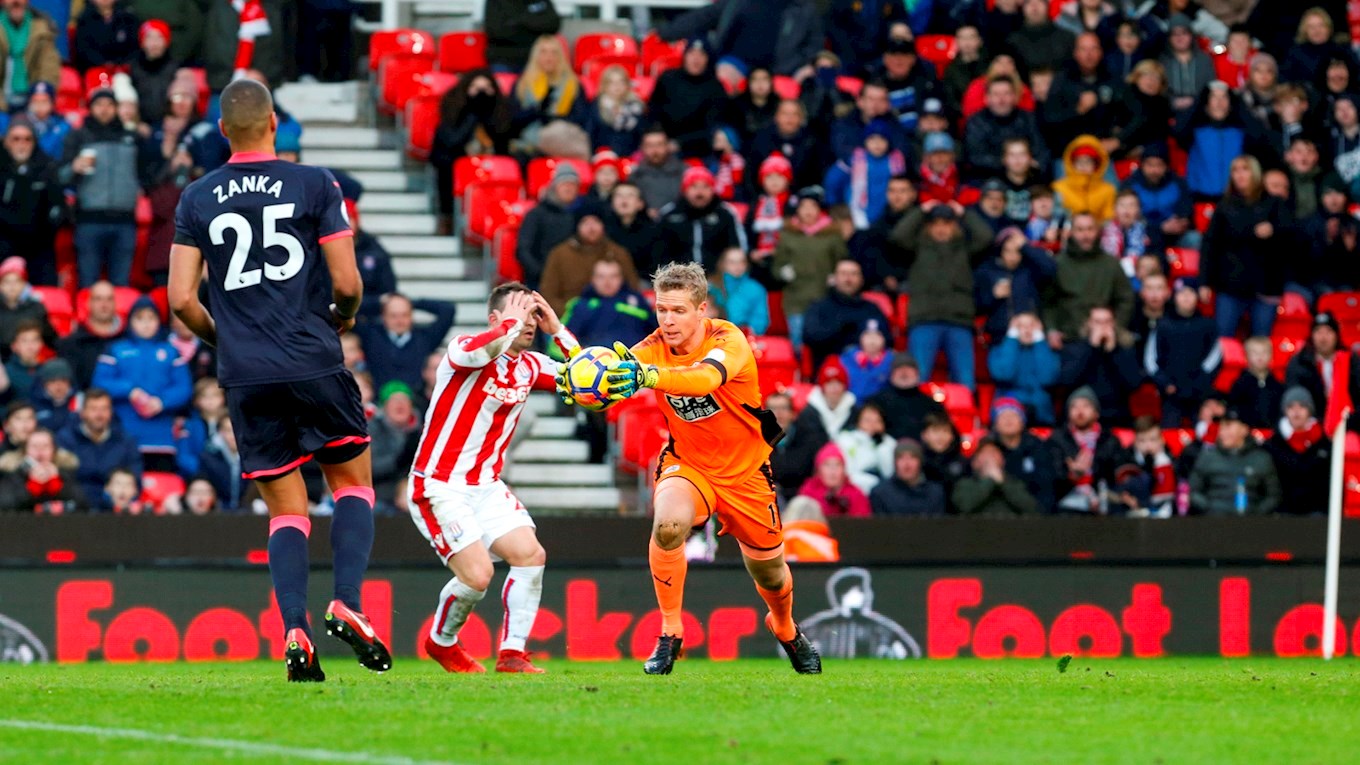 Paul Lambert began his tenure in charge of Stoke City with a victory at Town’s expense.

Both goals arrived in the second period, as Joe Allen and Mame Biram Diouf netted to cap a disappointing afternoon in Staffordshire.

A bitter January day in the Potteries brought with it three changes from the last outing against West Ham United. Florent Hadergjonaj (opening appearance of 2018) and Steve Mounié were preferred ahead of Tommy Smith and Laurent Depoitre, with the final change occurring in the form of Alex Pritchard earning his first Huddersfield Town start after replacing Joe Lolley (hamstring). Collin Quaner returned to the squad having previously missed out through injury, and was named amongst the replacements a year to the day since joining the Club from Union Berlin.

Town entered the Bet365 Stadium to an atmosphere at fever pitch, stemmed from the occasion of newly-appointed City boss Paul Lambert taking charge of his opening match on home soil.

Mathias Zanka recovered well early on as a lapse in concentration whilst playing down the line to Hadergjonaj was sharply intercepted by Mame Biram Diouf, who Lambert had selected to lead the line for the Red and Whites. Zanka covered well to clear, whilst also initiating an attack down the right at the second time of asking which ended in Jack Butland smothering a deflected cross which had been destined for Steve Mounié in the centre.

As expected, the hosts started with a sense of intent and urgency whilst hunting an early goal to settle any nerves; home skipper Ryan Shawcross- one half of a Stoke central defensive partnership which had the potential to cause many problems from set-pieces from a considerable height advantage- headed over at the far-post from Joe Allen’s deep corner having physically jostled his way into space.

Both sides were trying their luck down the flanks. Alex Pritchard and Florent Hadergjonaj linked up well down Town’s right to conjure up a teasing cross which no navy shirt could latch on to, before new home addition Moritz Bauer signalled his offensive intentions down Stoke’s right but found a determined Christopher Schindler in the way to halt the progress.

Half-chances aside, the affair’s quality had been lacking. Although both teams were looking to execute manoeuvres through wides areas, creativity with the ball was a rarity. Nonetheless, Florent Hadergjonaj managed to work a decent amount of room to deliver on having rounded Pieters, and the lonely figure of Steve Mounié at the near post would eventually fire agonisingly wide of the target.

To an extent, Town had nullified the buoyant atmosphere which had amalgamised the City faithful prior to kick-off, but despite remaining relatively solid defensively, David Wagner’s Terriers struggled to advance up the pitch to play in the final third. Full debutant Pritchard accompanied with the duo of Tom Ince and Rajiv van La Parra were finding it particularly difficult to set the wheels in motion. Still, the contest was evenly poised and firmly in the balance as the interval approached.

As proceedings looked to have been petering out to a half-time stalemate, Swiss International Xherdan Shaqiri thought he’d worked an opening with Jonas Lössl substantially off his line. Instead, Town’s Danish custodian managed to claw away the resulting chip, and vitally kept the score level at the break.

Shaqiri’s acrobatic over-head kick found the net off the bar, but the linesman’s flag came to a relieving rescue.

That one didn’t count; but the next certainly did.

Town were caught napping, and Maxim Choupo-Moting exploited space in-behind Florent Hadergjonaj. The Cameroonian surged to the by-line before squaring across the face, and although no Stoke player could force an attempt, Joe Allen arrived perfectly at the back post to tuck home and hand the Potters the advantage.

By now the atmosphere had really been ramped up a notch, and the home side continued to apply pressure and could well have doubled that lead just minutes later. Shaqiri’s mazy run concluded with the winger shooting low and hard to which Jonas Lössl pulled off a tremendously agile reflex save.

Stoke poured forward, this time Choupo-Moting looked to add to his assist by heading in a second from Moritz Bauer’s cross, but Shaqiri’s wide companion failed to adequately get over the ball in order to at least draw a now very busy Lössl out into another crucial denial.

The pressure would pay off, as Mame Diouf made it two.

A defence-splitting pass was culturally flicked on past a deceived Christopher Schindler, and Diouf finished off the post having been one-on-one with Lössl.

With Laurent Depoitre now on the field alongside Steve Mounié, yet another counter-attack saw Paul Lambert’s rejuvenated Potters nearly grab a third.

Substitute Peter Crouch simply played in Shaqiri down the right, and with acres of grass to explore, the latter eventually picked out Choupo-Moting who blasted a volley way off target. The hopes of an unlikely comeback were diminished by the second, as Town’s attentions now turn to an Emirates FA Cup tie with Birmingham City.