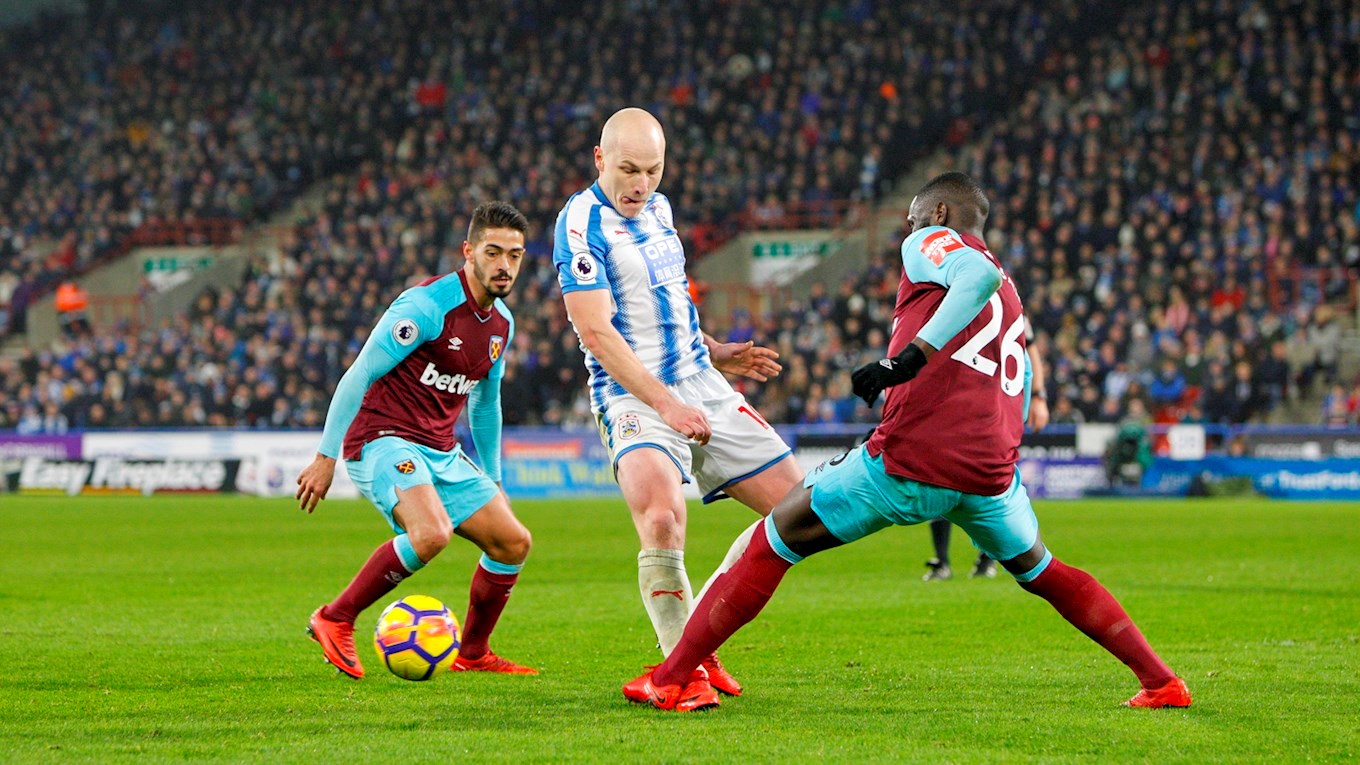 An entertaining first-half saw Town head into half-time as the side buoyed after Joe Lolley had cancelled out Mark Noble’s opener, but the visitors effectively put the game to bed within a 20-minute second-half spell thanks to Marko Arnautović’s volley just seconds in addition to Manuel Lanzini’s brace.

Terence Kongolo and Alex Pritchard lined-up amongst the substitutes and would have to wait to make their debuts on home soil, whereas Joe Lolley was named in the starting eleven to make his first Premier League start in HD1. Town entered the contest against the Hammers without the services of Elias Kachunga (knee), Chris Löwe (foot) and Collin Quaner (ankle), Martin Cranie (ankle) whilst long-term absentee Jon Gorenc Stanković also remained on the sidelines.

The Terriers had won 10 of the last 12 meetings in West Yorkshire against the East Londoners prior to the 3pm commencement; a stat that was put to bed.

Town quickly set about avenging a 2-0 defeat down at the London Stadium back on a wet September night in front of the Sky cameras, and yet another packed house roared on the boys in Blue and White in the hunt for what would have been three valuable points.

Joe Lolley’s direct running caused early problems, as a surge resulted in Scott Malone driving back across the face of goal towards Depoitre which needed a vital last ditch touch from James Collins to divert away. Christopher Schindler flicked on invitingly from the following corner, but no Terrier gambled on the loose ball which saw a great chance at the far post go begging.

West Ham displayed a threat on the counter. Manuel Lanzini’s smart turn on the half-way line gained space to drive away from marker Mathias Zanka, and slipped in Austrian International Marko Arnautović.

Arnautović, playing as a striker rather than his usual role out on the wing, was denied the chance of a clear shot on goal by the recovering determination of Skipper Tommy Smith, who in-turn produced a necessary level on strength to win possession back for the Terriers.

The football community showed its true comradery once again as supporters of both Clubs impeccably observed the minute’s applause on the 15 minute mark.

David Moyes’ side sat just two points behind Town in the Premier League table before proceedings began to unfold. Both sides were intent on being the first to hit the front, but despite hard-work from both camps in the central areas, clear-cut chances were of a rare nature in the opening quarter.

Nonetheless, West Ham clinically punished the Terriers when a good chance did eventually come their way.

Jonas Lössl’s short distribution to Joe Lolley resulted in the latter being hounded out of possession by Mark Noble. The area in which Town had tried to play out from the back had been considerably crowded out by the visitors’ high press, and it would pay off as Noble reacted quickest to finish expertly past Lossl and put the Hammers a goal to the good.
It was vital that David Wagner’s men remained confident and collected whilst approaching the task of getting back into the game, and to an extent Tom Ince personified that approach by dancing his way past Collins before delivering an inventive cross which rolled agonisingly in-front of Laurent Depoitre’s out-stretched boot.

The Irons had somewhat stood firm, but that Town confidence and persistence to probe and patiently work an opening would prove to be of a monumental stature five minutes before the break.

After leaping the highest at the far post seconds earlier but failing to make an adequate connection for a downward header to trouble Adrian between the visitors’ sticks, Lolley cut inside and produced a superb curling effort into the far corner, cueing pandemonium on the terraces; and renewing a fresh belief that Town could well go on and retrieve maximum points from this huge encounter.

It was the Blue and Whites who now had the momentum as the interval approached, and they had responded brilliantly to adversity.

Mathias Zanka thought he’d headed home a second from a trademark Aaron Mooy corner, but Collins was perfectly placed in the six-yard box to clear away the danger, leaving the second period firmly poised.

Instead of the Terriers capitalising on pre-break fluency, West Ham- and in particular Marko Arnautović- stunned the home faithful by re-taking the lead in impressive fashion.

Town were caught napping immediately following the referee’s whistle, and a missed interception let the Austrian flick the ball into his path before unleashing an accurate volley which Jonas Lössl couldn’t keep out despite his best athletic efforts.

Scottish boss Moyes may well have seen his team stretch that lead to three, but Aaron Mooy was on the line to hoof away Arthur Masuaku’s bundling effort from a yard out.

Rajiv van La Parra signalled the intent with which the Blue and Whites would force a way back into the contest once more. The Dutchman swung in a peach of a cross for the large frame of Depoitre, and as most cases when faced up with his marker, Laurent leapt highest but saw his header sail over the cross-bar.

United broke with pace, and as Arnautović played in Lanzini, the Argentinian tried his luck with a ‘rabona’ style skill, ultimately allowing Jonas Lössl to gather with ease.

But the playmaker certainly righted his previous wrongs by firing home to give the away side breathing room; twice.

The link with Arnautović had been working with relative success, and the chemistry would pay off with devastating consequences.

Lanzini firstly sprung the offside trap to latch onto a precisely weighted through ball from his forward companion and tucked home into the far corner. The visiting number 10 followed up by finishing off yet another lethal counter-attack, which had exploited alarming gaps in the defensive armour of the Blue and Whites.

Arnautović raced forward after taking advantage of an unusual slip from Christopher Schindler, and even though the German recovered well, defensive counterpart Zanka’s clearance was mopped up and thumped home by Lanzini to compound the Terriers’ woes.
The precision with which the visiting Hammers had punished Town had been a tremendous shock to the system, but nevertheless the home side kept pushing forward in search of that elusive glimmer of hope to spark an unlikely comeback. The Head Coach changed the shape of the set-up, and also handed those home debuts to the duo of Pritchard and Kongolo.

Pritchard was a whisker away from opening his Town account in style. The mid-week signing from Norwich City took responsibility for a free-kick on the edge of the area, and despite a hefty deflection off Jonathan Hogg, Adrian had to be alert to make a quick reaction save down to his right.

United wound down the clock with suitable management, as Town will look to return to winning ways in next weekend’s trip to Stoke City.